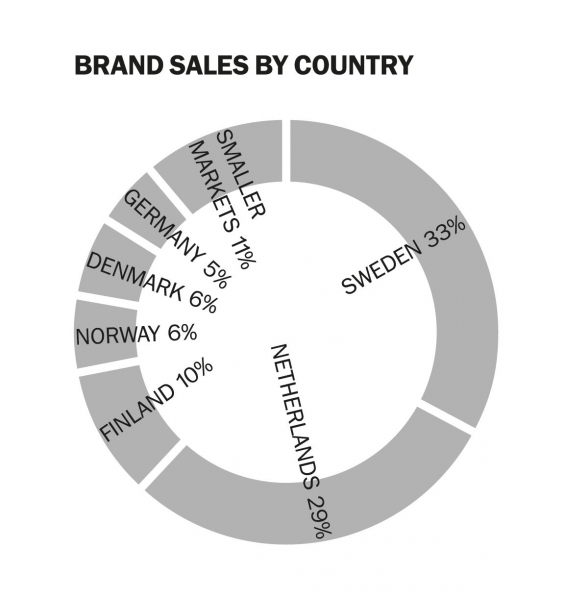 Björn Borg is currently represented in around 20 markets, of which Sweden, the Netherlands, Finland, Norway, Denmark and Germany, and are the largest, in that order.

The Björn Borg trademark was registered in Sweden in 1989 and established in the Swedish apparel market in the first half of the 1990s. The first Björn Borg store was opened in Stockholm in 1994.

Today Sweden accounts for 33 percent of total brand sales. Björn Borg products are sold by about 900 retailers around the country, through Björn Borg’s eight stores, two of which are factory outlets, as well as online.

Today Björn Borg has broad distribution in the Swedish market, where all its product groups are represented. Further expansion at the retail level is done selectively with existing and new product categories such as sports apparel and performance underwear. Brand sales rose 1 percent in 2019 compared with the previous year.

As of January 2017 Björn Borg AB owns the former Benelux distributor. The acquisition was an important step to accelerate the vertical integration of Björn Borg’s operations and is in line with the strategy to get closer to consumers and retailers in Björn Borg’s main markets.

The Netherlands was the Björn Borg brand’s second largest market in 2019, with 29 percent of total brand sales. Operations in the country date back to 1993, when the brand quickly established a market position through growing volumes and a broad presence. Björn Borg products are currently sold by around 660 retailers and ten Björn Borg stores. Every product area is sold in the Dutch market, where brand sales rose 34 percent during the year.

The brand was established in Finland in the second half of the 1990s and has developed strongly in recent years. Today Finland accounts for about 10 percent of total brand sales and is Björn Borg’s third-largest market. Underwear is the dominant product area, although footwear, sports apparel and bags are sold as well. Distribution is mainly through around 460 external retailers, but there are also nine Björn Borg stores in Finland, four of which are factory outlets. Brand sales in Finland decreased by 19 percent during the year.

Björn Borg was launched in Denmark in 1992 and today it accounts for 6 percent of total brand sales. Björn Borg products are sold exclusively through around 520 external retailers. There are currently no Björn Borg stores in the country. Every product area is represented in Denmark. In 2019 brand sales decreased 17 percent compared with 2018.

Björn Borg was launched in Germany in spring 2016. Today Germany is Björn Borgs Borg’s sixth-largest market, with 5 percent of total brand sales. Underwear dominates the German market, although all the product areas are sold. Björn Borg’s products are sold through around 45 external retailers as there are currently no Björn Borg stores in the country. Brand sales in the German market rose 35 percent compared with 2018.

Smaller markets include Belgium and the United Kingdom as well as a number of other markets such as Switzerland, the US, Slovenia, France and Canada.

Björn Borg was established in England in 2006 through a launch at the department store Selfridges in London. In 2011 Björn Borg started its own operations together with a local partner after the previous distributor was terminated. Distribution has since been broadened to include several other well-known retailers such as Harrods, John Lewis and House of Fraser, at the same time that more categories have been added such as sports apparel. In addition to external retailers, Björn Borg has its own factory outlet in England, where brand sales decreased 14 percent in 2019 and accounted for 4 percent of total brand sales.

Brand sales are decreasing in many smaller markets with the exceptions of Switzerland, Slovenia and France, where sales are on the rise. Björn Borg has chosen to focus more on what it considers its key markets, i.e., Northern Europe.